by Simon
(Ottawa, ON)

I'm in the planning stages of a 16x18' free-standing deck. I want to keep the total height below 24" above grade (ideally 23" for some extra margin) at its highest point to avoid having to get a building permit & inspections.

My grade drops by approx. 5 inches over the 18' run from the house to what will eventually be the perimeter of the deck.

What do you suggest would be the best way to brace and frame using the Titan Deck Foot?

My original plan was to notch 6x6 posts for my double 2x10 beams, with 2x8 joists on top of that, but by the time you add up the nominal height of the beam, joists and 5/4 decking, I am already at 17.5". If the deck can be no higher than 23-24" above grade at its highest point, the deck near the house would need to be 5" less, or 18-19 in. to allow for the grading. This would leave me with almost no base for the post once notched. Is there a minimum height/length notched posts must be to properly sit in the base? Some of the example photos on the site show what appear to be very short posts, but I'm guessing there is at least a few inches before notching to allow for it to be connected to the post base.

What are my other options? I know you can lay beams or joists directly in the post brackets, but I'm guessing this would only work on level ground...

Can I do the notched posts and then just hang my joists from the face of the beams? That would seem to solve my problem of the overly short post lengths, but will it result in a secure frame?

This is a great question. And I have uploaded some photos and illustrations of how you can cheat a bit using short 6x6 posts, 2x8 beams and 2x8 joists and with your decking come in below the 24" mark. 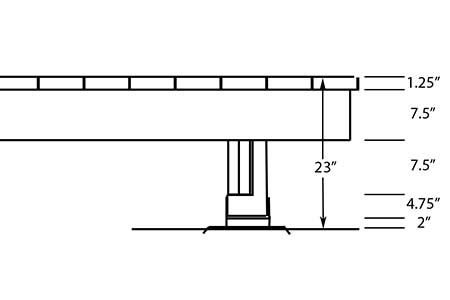 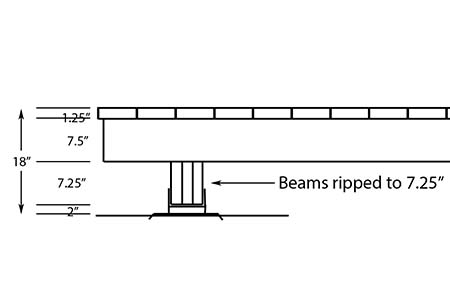 Notice how the beam was just set directly into the post bracket. Shims or spacers are required to make the beam fit perfectly with the post bracket. Also This technique requires that each of the footings are level with each other so that the beam is level along its length. If not, you may have to shim to get it level.

You can also use joist hangers from the inside face of the beam. So I will demonstrate that also. Just wanted to post something quickly to let you know you had a great question and I am sure many other people have had the same question.


Beams And Joists Flush With Each Other 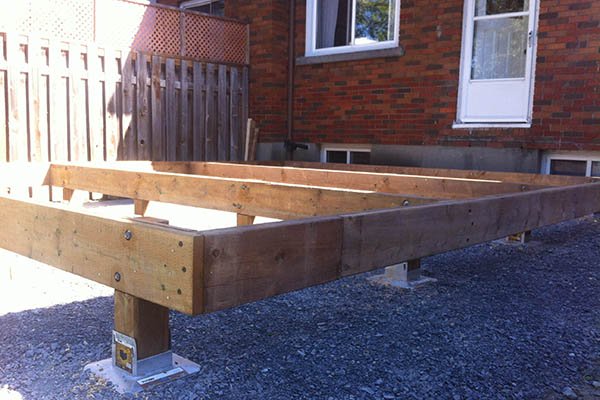 You can see in this photo above how the grade slopes away from the house but the deck is much lower to the grade near the house. The support posts have been notched to support beams down the slope. But near the house the beam rests directly on the deck foot post bracket, only 2" above grade. The joists will be hung between each beam. This allows you to drop the deck very low if needed. A nice technique.

You can learn more about this by reading this article on the Titan Deck Foot Anchor.