A Deck With A Hot Tub On A Slope

Decks on sloped grades can be perfect for built in hot tub spas.

Don't let a challenging landscape hold back your vision of how you want your backyard to be.

This was a particularly challenging site to build on.

The slope is actually convex. So it gets steeper as you move further away from the house.

But with an open mind, you can design something similar to suit your home.

Hot tub decks can be incorporated into slopeside locations.

Take a look at the top-down view of this site.

You can see a deck on the backside with two stairs running off both sides.

When I arrived, that deck was 6'x 12' with the staircase on the left (top-down view).

The idea was to enlarge this deck - extend if further away from the house by another 4'. Then build a low-level deck that would sweep away from the grade as you move also down the backyard.

The other design refresh ideas we suggested was to install a waterproof vinyl membrane flooring material - similar to what you see on the floor decks of boats. This would give the homeowner a dry area underneath the enlarged deck.

A Chance To Use Some Unique Materials 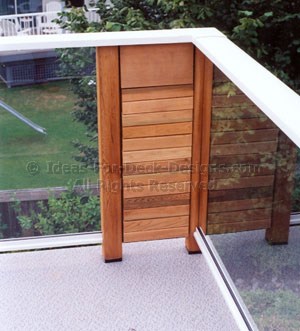 This meant that the existing beam had to be moved further out from the house so that the cantilever was a maximum of 18".

The existing deck railing had to be removed, and a combination of beautiful cedar surface mounted deck railing posts with aluminum rails and glass panels.

As a special touch, I built double-sided louvered removable panels with low voltage lighting underneath the top rail.

The louvers diffuse the light ever so subtlely.

The old 2x6 deck boards were replaced with 5/8" tongue and groove sheeting, glued and screwed to the joists.

A 40 mil vinyl flooring material was installed to completely waterproof the deck.

There is no more water dripping down to the area below and no more annual maintenance. 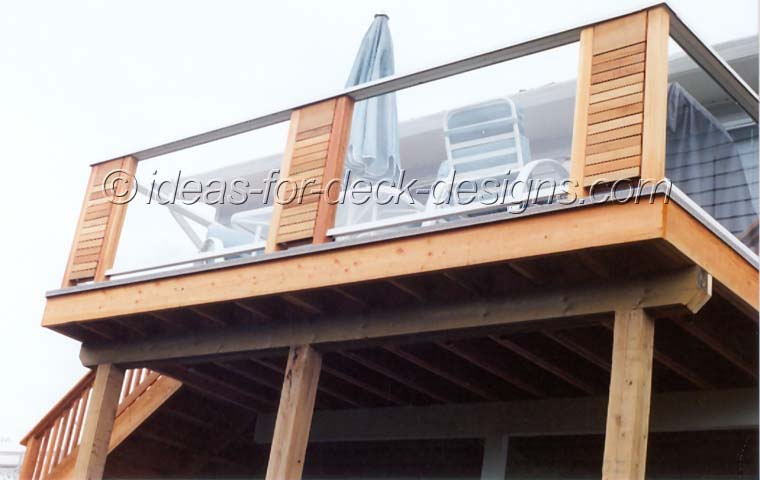 If you look closely, you can see the original carrier beam closer to the house.

Building another bean and sistering longer joists together with the originals, the upper deck became a much more useful space.

Now there is room actually to live up there.

There are some tables and chairs and an umbrella. All you need is a cold drink.

The original stairs were the only means of getting to and from the old deck. 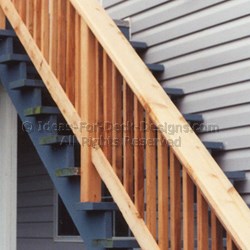 Here are the original stairs running alongside the house.

This was the only means of access prior to the re-design.

You should always think seriously about how many stairs you want and where to locate them. It is rarely sufficient to have a single staircase.

It tends to make it more of an inconvenience to get to and from your deck from the backyard. With the addition of a new lower deck, we had the perfect opportunity to open things up.

Imagine this! The design called for the hot tub to go around the corner of the house, which wasn't quite steep.

There was lots of room to create a great gathering area with built-in benches around the hot tub deck.

An added touch was a wide-open wrap around staircase with closed risers to block the view under the deck.

The hot tub was set upon a concrete pad that was cut into the slope. For ensuring the drainage, drain tile was placed around the pad and covered with granular stone before the cement was poured.

Another nice touch you might consider for your own deck was setting the deck boards for the hot tub deck at 45 degrees rather than perpendicular to the house.

The idea here was to create all kinds of subtle hints of connectivity between the upper deck and the lower deck. The angle of the deck boards seems to carry the eye from either level to the next.

Linking The Decks With More Stairs 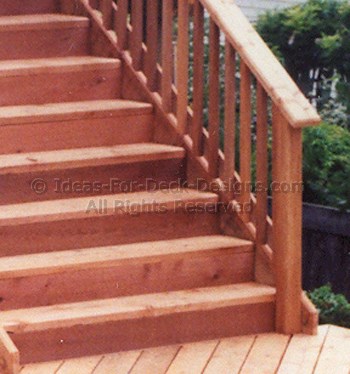 To join everything together, we built 6' wide stairs to link the decks and closed the risers.

The effect is one of openness and no visual breaks or distractions because you can't see between the stair treads.

In the end, this concept served to unite the two decks, which otherwise could have ended up being completely separate.

The open end of the hot tub deck where the stairs were located was cut at 45 degrees to make room for a bit of foot traffic around the deck and reduce the deck's size.

A 1x8 skirt was installed underneath the hot tub deck to hide the remaining view under the deck where the hot tub was located.

The benches double as a place to sit and gather around the hot tub and as a railing to protect people from falling.

Bench seating was used to close in the lower deck. 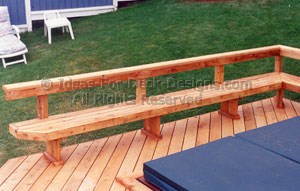 The building code did not call for a mandatory guard rail because it was less than 30" but its still a good idea to combine the bench railing concept.

It's a really simple trick.

And now that the 2015 code is being re-written to set the top of the bench to 36" from the deck, you can use this as a railing if you have to.

From nothing to something stunning

Use these design ideas as principles to start the discussion.

Don't limit yourself to a simple shape or single level. Work with what Mother Nature gives you and turn that hillside building site into something incredible.

Watch this video on our Youtube channel about design principles.