A free standing hot tub deck can be designed to sit away from the house. 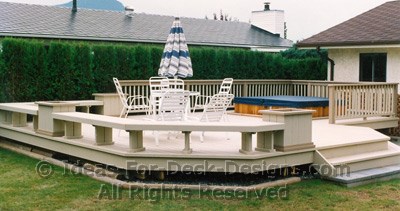 Floating decks are nothing new. They offer many benefits such as easier installation and no ledger connections.

But this deck was positioned away from the house so a walkway could be designed.

This allowed foot traffic all around the deck and kept access to the rear garage door of the house.

Open your mind to the possibilities depending on what you need for your home.

This house was a single story rancher/bungalow so whatever deck was built would have to be low to the ground.

The hot tub was sitting pretty much you see it now. Except there was no deck. It was all by itself.

The challenge here was to build a backyard getaway that created a focus on the deck.

So we created a completely free standing hot tub deck design that draws people in and encourages just hanging out near the spa.

But importantly, a pathway was left in tact so people can easily walk along side the house to access the garage and a storage area at the side of the garage.

Built in benches to define and set the boundary 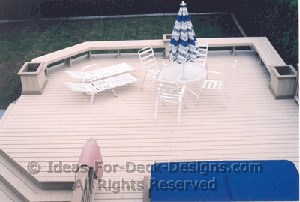 Benches were carefully built around the outer edge of the deck and framed with planters on opposite ends.

A third planter was place in the middle to break up the long distance of bench.

The effect of using benches in this way is to give a feeling of security and to define that part of the deck as a space to relax around the table, and chairs.

It also provides a measure of safety even though this deck did not require guard rails.

The corners of the deck were softened with 45 degree angles as were the stairs. 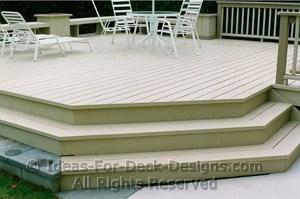 Another useful technique to keep a large expansive deck open and inviting is to use cascading steps.

These stairs do not restrict foot traffic. You can enter or leave the deck anyway you wish.

They can be tricky to build and there are various techniques from building platforms on top of each other to traditional stringers.

Using stringers tends to result in tricky compound angles having to be used.

But the end result is one of openess and an invitation to delight yourself in this backyard oasis. 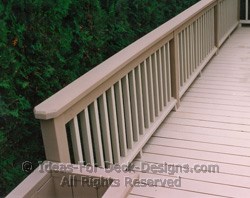 The use of contrasting colors can soothe the eye and break up what otherwise might be a bit monochromatic and boring.

You will see that here in this image of the deck railing where the top rail is a slightly darker tone than the balusters.

The top cap piece around the planters was also stained darker to create a similar effect.

A hot tub on its own - or a complete deck

This backyard had to have a floating deck. The house was a single story and already low to the ground rendering a ledger connection more hassle than it was worth. But access was needed alongside the house.

A structure set away from the house like this, can then accommodate that design need. And the end result is quite beautiful.

So there is another stylist tip for your tool box.

For more tips on designing, check this video on our Youtube Channel.