Replace or Re-use and Protect Old Beams and Joists

Replacing my southeast MI 30-year-old deck, was hoping just to replace the surface boards but many of the posts were set too deep and rotted at ground contact, replacing those has been fun.

The joists and beams, however, are dry and rot free. What is the opinion on replacing vs re-using? If re-using should I apply a sealant to prolong the life? If so what product would be best? Would like to repurpose what I can but wisely.

Editor Comments
I would not spray it with anything. Instead, use G-Tape and run it over the joists. It's a very simple way to protect joists, cost effective and quick to do.

Check out this video for more information:

Hey, everybody. Today, I just received an email from Mike from Dearborn, Michigan.

And Mike is asking an interesting question that I think a lot of you will be interested in hearing. He says:

"I'm replacing my Southeast Michigan 30-year-old deck. Was hoping just to replace the surface boards, the decking boards, but many of the support posts were set too deep and rotted at ground contact. Replacing those has been a lot of fun. The joists and beams, however, are dry and rot-free. What is the opinion on replacing versus reusing? If reusing, should I apply a sealant to prolong the life? If so, what product would be best? Would like to re-purpose what I can but wisely."

Great question. You're lucky that the framing seems to be in great condition. I wouldn't spray it with anything. Honestly, what I would use, the simplest thing I could tell you is to get some G-Tape, stuff is great, 65-foot rolls, 2-inch or 4-inch wide. It's an acrylic adhesive which is different than the typical butyl adhesives.

If you've ever seen those butyl adhesives, first of all, when their packs are like this, you can actually see like the goo between each layer. It's a mess.

And another thing is it's really cool, is it can stick to itself and come apart. Now, you may not think that's a big deal, but if you're trying to do that with the butyl stuff, oh my goodness, once it goes together, that's it, it's wrecked. So you would just roll this down like this and it sticks on so beautifully.

Another thing you can do is you can tear it with your hands. Now, you cannot do that with the butyl stuff. It's just a mess. So you've got all kinds of flexibility.

With this stuff, with being acrylic, it dissipates the light a lot better, whereas poly butyl, the butyl stuff breaks down over time.

What else can I tell you? Basically, you know, in a couple of days, this is gonna sort of meld into the cellular structure of the wood. So this is a fantastic product. I would just take all your joists and just run this tape over them, and that will protect your deck for, hopefully, another 30 years.

It's really that good. They're not very expensive and I definitely recommend you do that. So good luck to you, Mike, from Dearborn, Michigan.

One Homeowner Tries Both Types of Tape

This homeowner tried using both types of joist tape and did a pretty thorough analysis. They both seem to do the job and keep the joists dry over time which is the ultimate goal. See the comparison in this article. 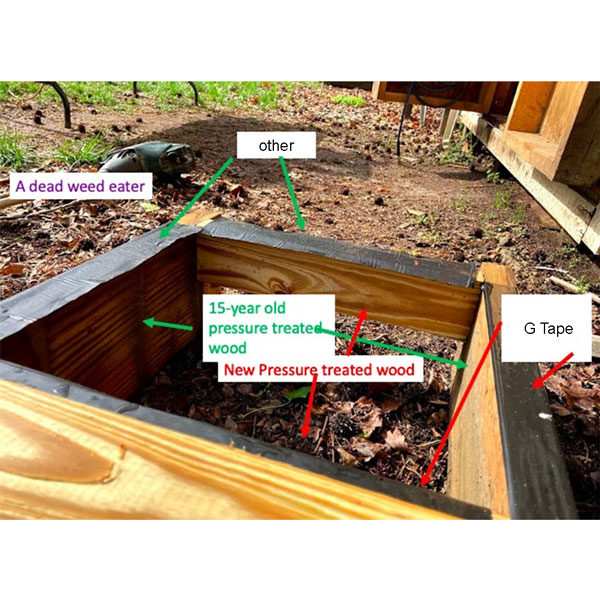