How you layout your stringers depends on the style of your stairs.

Will your treads be fully exposed as with an open or notched stringer?

Do you prefer the tread nosing to be set within the periphery of the width of the outer stringers?

Do you want open or closed rises?

Think it through as I show you the drafting and layout techniques for all of them plus building code references. 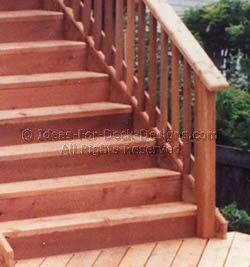 What is the Unit Rise & Run?

Divide that number by the ideal Unit rise of 7-3/4". The quotient is the number of rises you will trace out on the 2x12. 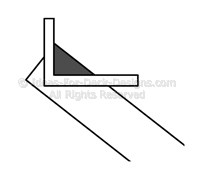 Tracing Out First Unit Rises and Unit Runs on Stringer

Get a carpenters framing square and if you have little buttons that clamp or screw onto the square even better.

Align the rise and run measurements on the square with the edge of the stringer. This will establish the starting point for the stringer.

Trace out the Unit Rise and Unit Run as shown by the measurements on the square. 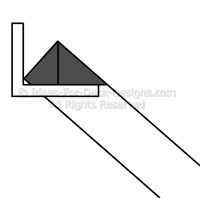 Extend the horizontal line across the 2x12.

Finish off by extending the vertical line down to the edge of the board. 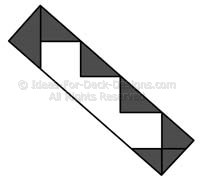 You want to end up with something like this if your are planning a cut and notched stringer.

Laying Out a Solid Stringer

Solid stringers can only be used on the outer sides of a set of stairs. 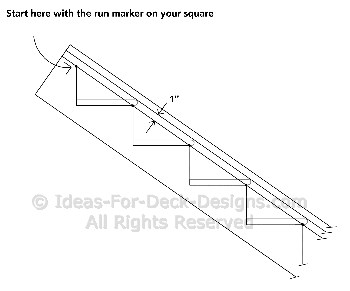 But you have some freedom in the way you design the tread locations.

A nice finished look uses a design where the nosing of each tread is hidden within the width of the stringer.

Notice how the nosing of the treads does not stick out beyond the edge of the 2x12.

Creating this kind of layout requires a few simple tricks. 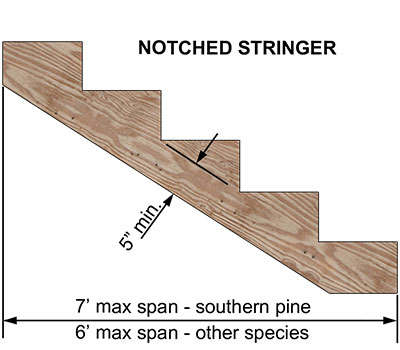 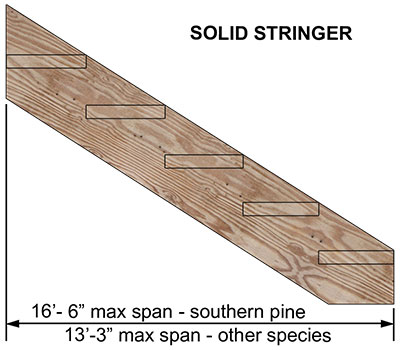 Here Is How It's Done 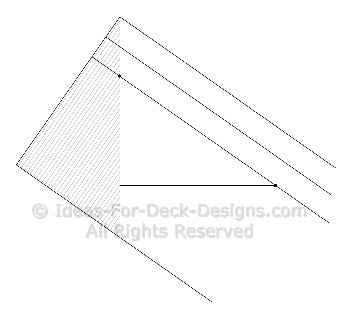 We use this little line with the two dots as the "baseline" or the line from which we will reference each unit rise and run.

Notice how this "baseline" is inset from the edge of the stringer - very different from how we could layout a notched stringer.

Then we mark off the end cut line of the stringer and proceed to trace out each sequential unit rise and run.

Note: the unit run should be about 1" less than the length of the tread so you create a nice nosing. 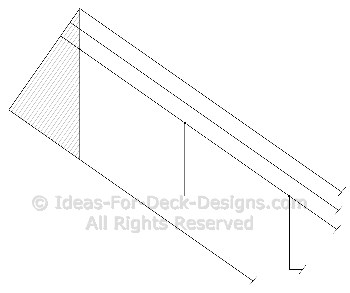 Use this second of middle line as the marker for the nosing of the treads.

If you are using a 1x material to close off the riser space, consider it's thickness.

Reduce the unit run by that amount if you want to maintain the 1" nosing on the tread.

At the last rise, draw the bottom cut off line. 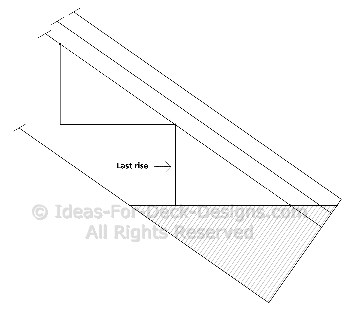 Some Other Great Reading

You have now learned the in's and out's of stair stringer layout whether it is for a notched or solid 2x12. You have to know both methods because many stairs require a midspan stringer which is always notched.

Now it's time to find out how to carefully cut out the notches.