I want to replace an old deck that is built next to an in ground pool.

The pool sits on a small bluff and is surrounded by a 4' concrete pad. The current wood deck extends out from the concrete pad approximately 16'. The grade underneath the deck slopes down about 2.5' from the concrete area. At the perimeter of the deck there is a retaining wall so most of the soil underneath the deck is probably sandy fill. Beyond the retaining wall the hillside drops off dramatically - it's almost a cliff. (See Pix)

The current deck doesn't have any footings in the ground, just a couple of large chunks of concrete that were set on the soil. Obviously, the concrete has shifted down the slope over time and the deck is sagging about 6" at the edge.

My questions is this: Would the Titan Deck Foot™ be a viable solution in this environment?

There is no question that the Titan Deck Foot™ is more than capable of supporting a deck structure as you describe if it is installed properly and enough of them are used in order to ensure that no single footing is over loading the soil beneath it.

However, what you have described - an entire slope gradually sliding or shifting downwards is indicative of perhaps other things going on. And in such a case even if you dug six foot deep footings that rested on undisturbed soil the rest of the soil above might still be creeping downward incrementally each year. If so, you may just end up finding that even a deep footing starts to tilt downward with the slope movement.

One way to assess this is to look at your retaining wall. Is it still vertical? Did the builder place timbers that projected back into the uphill part of the slope to try to anchor the wall?

You need to understand better what part of the slope is moving. Was it just your area that was filled in? Is it now stable and settled. Maybe you should spend $200 for a site visit by a local geotechnical engineer. They are very useful and can nail down this problem very quickly for you.

He might tell you that the only way to really prevent further movement of the deck is to install engineered helical piers that go down eight feet or deeper. In so doing they may well remain stationary while the soil in upper zone continues to move a little bit. Only he can determine that. But now you are into a much more expensive fix.

Deck Foot Anchor™ On A Slope

The Deck Foot anchor is more than capable of carrying the weight of the deck and distributing it over the surface of the soil. And indeed if you use the 36" length - which would be recommended in any sloped application - it will be very well anchored to the soil.

However even though it will be well connected, if the body or mass of soil that it is anchored into itself if moving or creeping, you can expect that the deck will be moving with that annually down the slope. That has nothing to do with the efficacy of the footing but everything to do with the nature of the stability of the slope.

If you were to use the deck foot on a slope here is a general rule of thumb. 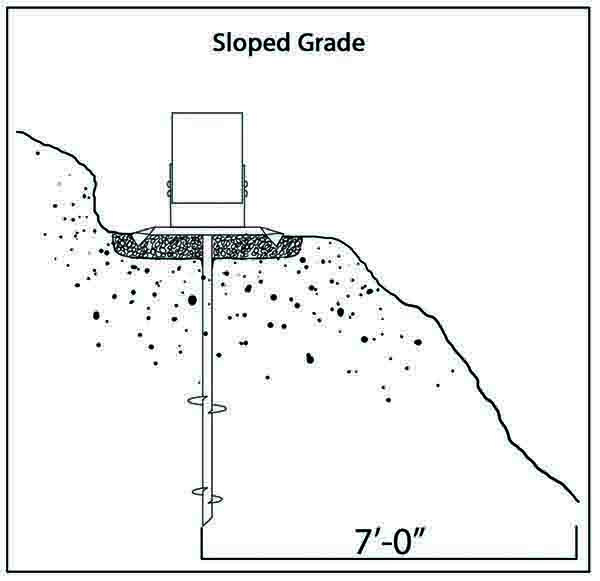 This assumes the soil on the slope is stable and that you use a 36" long auger rather than a 24" auger.

So the take away message for you and all readers about this kind of a situation is that it is critical to get an understanding of the stability of the slope first. Then you can decide if you want to go with a much more expensive engineered helical footing or a less expensive system like the Deck Foot Anchor™. But if movement still persists you might have to jack up the deck frame and shim or lengthen the support posts to accommodate for the movement every few years.

Ideally you want to use the deck foot on soil which you are confident has settled and not subject to further movement.

There is more information about the deck foot anchor here.