Where does the Ontario building code set out the allowable height for freestanding decks?

I would like to use the titan anchor for a free standing deck. You mention lots of familiarity with the OBC and also deck heights up to 6'. I have been looking for specifics in the OBC and can only find

9.12.2.2. Minimum Depth of Foundations
(7) The foundation depths required in Sentence (1) do not apply to foundations for decks and other accessible exterior platforms,
(a) that are of not more than 1 storey,
(b) that are not more than 55 m² in area,
(c) where the distance from the finished ground to the underside of the floor joists is not more than 600 mm,
(d) that are not supporting a roof, and
(e) that are not attached to another structure, unless it can be demonstrated that differential movement will not adversely affect the performance of that structure.

You are correct. That is the section in the OBC and the CBC that sets the height limit for structures unattached to a house. Just under 24" from the underside of the joists. So if you are using a 2x8 and 5/4 decking that puts the top of the decking at about 32-1/4" above grade.

Some Cities Have Their Own Rules Which Vary

And yet cities vary from this and over ride this in their own local policies. You will find this with the City of Barrie and the City of Ottawa as just two examples. Ottawa allows for free standing decks using common concrete deck blocks up to 60" high despite this section in the OBC. This may be the case due to the fact this section was written long ago before deck blocks and other surface resting footing systems became popular. Here the City of Sudbury does not specify any height limit to freestanding decks. However they wisely show the use of bracing to keep the deck from racking: 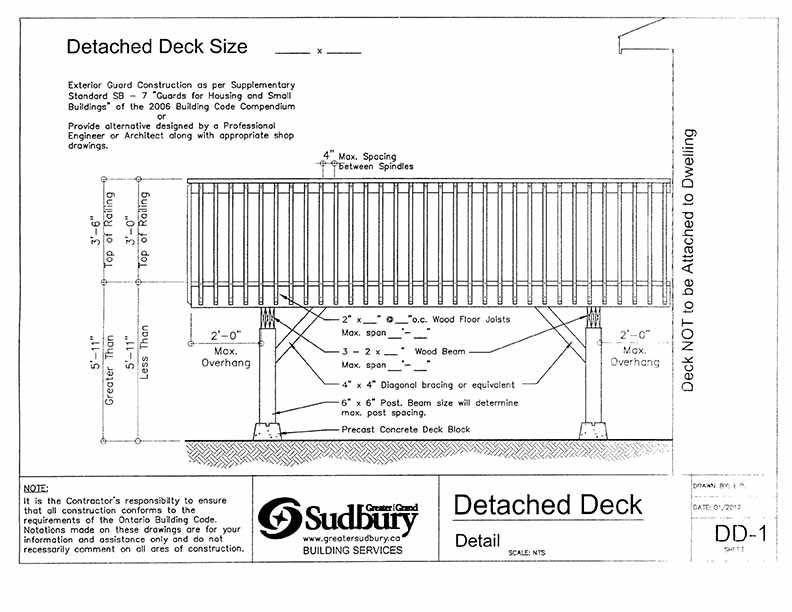 And in the City of Milton, they follow the basic stipulations of part 9 of the OBC at 23-1/2" or less from underside of the joists without any recommendation of using bracing: 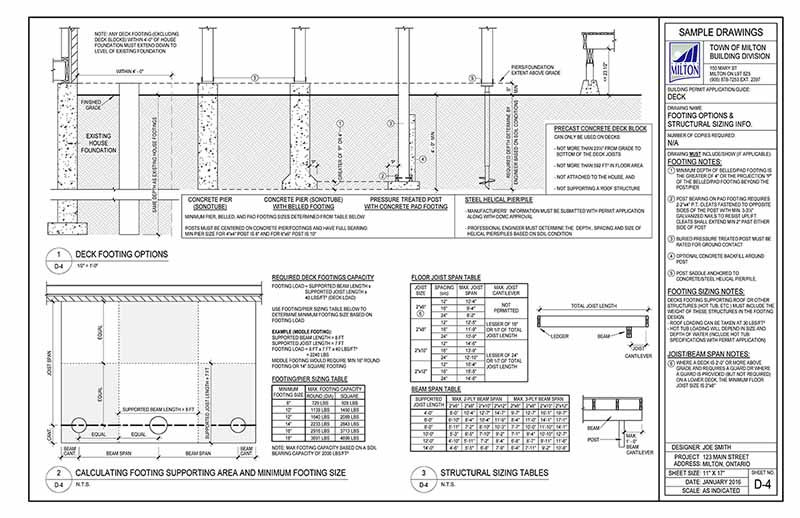 So the bottom line here is you should double check with your local city building department to see if they have come up with their own local policy that allows for a higher variance.

If we look at the number of above ground pool decks built across the country, the majority will be supported by common concrete blocks also known as deck blocks. Any above ground pool deck will by necessity exceed the 600mm (23.6") maximum elevation from grade to underside of joists. And yet this is the common building technique. Some pool decks require in excess of thirty footings, usually in pairs and some as close as 4' apart on center. Could you imagine the expense in money and time for such a project? The very reason people install an above ground pool is to save the expense of an in ground pool.

Inspectors are surely visiting these residences to ensure the pool has a proper fence around the property and will be looking closely at the free standing deck surrounding it. So a literal reading of the OBC and CBC would mean we have conflict and yet that does not seem to be the case. Inspectors are not forcing homeowners to install deep concrete frost footings.

This reinforces my earlier comment about many cities publish their own local guidelines which far exceed the code section you refer to. I have personally worked directly with some of the officials in Ottawa regarding the Titan Deck Foot Anchor in light of this section of the code and their height limit for free standing decks is 5' above grade.

The rationale for this section has never been explained and common building techniques such as bracing from post to beams can make any free standing structure up to 6' rock solid. And if the deck is set of the house an inch it is free to move a little bit over course of the seasons and yet remain stable.

Cutting into the envelope of a house, be it masonry, siding, stucco or whatever is a huge job and it has to done properly. If the basement ceiling is dry walled you have to remove the ceiling to access joist bays. This is a major job and will had hundreds, sometimes a thousand dollars or more to your cost. And for low level decks is absolutely not necessary.

Governments and public authorities by nature tend to be reactive whereas developers of new products and solutions are proactive because they are trying to solve immediate problems for their customers.

I also work closely with structural engineers at Intertek, one of the top testing labs in the world. These engineers have told me on a number of occasions that some sections of the code are just written to cover off a section and not necessarily because of empirical testing data or anticipation of accommodation of future products that may one day appear and superseded a given concern or issue.

We see this with the SB7 Guidelines in the OBC. These are axiomatic drawings for how to build wood railings by using known building techniques which are assumed by common experience to be sufficient. So when new products come along, it is often incumbent on the company to conduct tests for sections of the code which never envisioned their future existence.

So that is the status in Canada. Check locally because they do allow for higher variances. In the U.S. there is no explicit elevation limit although second storey walkout decks should always be supported by frost footings equivalent to the performance of the foundation for the home.