View of Railing From Both Sides

I have two questions that concern attaching balusters to nailers in the rail assembly:

1) Is it permissible to use 2x2 material to attach balusters to rather than 2x4's?
2) Wouldn't balusters resist load better if they were attached to their nailers from the deck-side rather than from the outside of the deck?

I cannot find any information online or within the codes that addresses the issue of railing systems, apart from min/max spacing and height specs.

You bring up an interesting point. I will do my best to address your concerns in the comments below.


The short answer to your question is yes it is permissible to use 2x2 material to attach the balusters. This is acceptable provided that the 2x2 is used as a nailer which is then itself connected to the 2x4 rail. However, there are a few points that you may want to consider. Flat 2x4s used for either top or bottom rail more vulnerable to sagging over time. Using a 2x2 nailer on top of the flat 2x4 would help marginally to resist this sagging. The vulnerability increases when the railing balustrade spans greater than 4 feet. So if you build this way, you may wish to consider using a support block under the bottom rail at mid-span.

You are correct! Technically speaking, if the baluster is fastened to the deck side of the 2x2 nailer it would be better equipped to resist the load. For example, if lateral force is applied from the deck-side it is impossible for the baluster and the nailers to come apart. They are being pushed together.

Whereas if you were to push laterally against the balusters from the outside of the deck it is possible, under extreme loads and with weak fasteners (ie. non-spiral shank nails) to pull the baluster away from the nailer. The question then becomes at what magnitude of force would the baluster be pulled away from the nailer. In real life scenarios, the baluster is usually attached by a screw which is very difficult to pull apart rendering this risk unlikely. I will explain more in the design load comments below.

There are a few things to consider with regards to design load and safety factor loads.

The IRC dictates that balusters in a railing be spaced no further apart than 4" from each other and that they can withstand a lateral force of 50 lbs psf. For example, imagine a 12" x 12" piece of plywood being pushed against the plurality of three balusters. The balusters should be able to withstand at least 50 lbs of force applied by the 12"x 12" plywood. 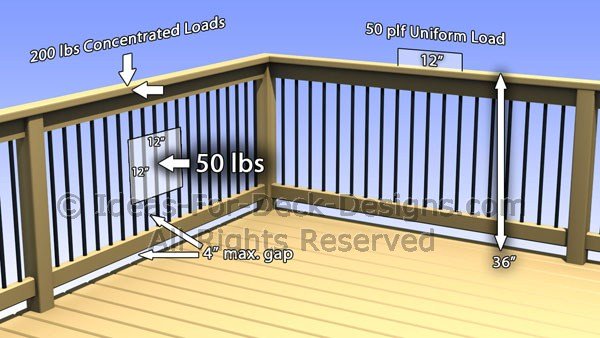 In addition to the basic design load that any railing must withstand, a safety factor is used when testing wood assemblies and assessing their performance standards. This is because when building with a natural material such as wood, there is a degree of variability from piece to piece. Safety factors are established by the way a structure is known to fail: either a slow failure or an explosive failure. An explosive failure will mean a higher safety factor is applied.

The IRC dictates a safety factor of 2.5 times for wood railings. So, the ultimate lateral force that the balusters must resist over 1 sqft is 125 lbs. It is true that if we were pushing from the outside of the deck against the balusters would likely result in failure at a lower load value than if we were laterally pushing from the deck-side. However, this becomes irrelevant if, in the weakest scenario, the balusters can still hold more than the safety factor requires.

If you have more questions about different things we discussed in this article, feel free to check out the resources listed below.

If you have questions of your own that you think we could answer for you, submit your question to us, we would love to write more posts about the topics you want answers to!

Join in and write your own page! It's easy to do. How? Simply click here to return to Deck Railing Forum.