There are several ways of installing a railing for your deck. Some are easier than others but also have draw backs as well.

The simplest way of doing it is to attach 2x2 pickets to the outer rim joist and then horizontally attach a 2x6 on edge to the top of the vertical 2x2s. 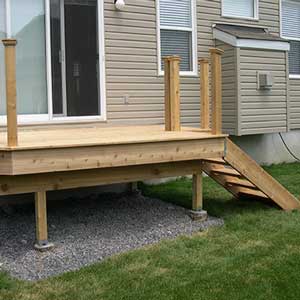 It's simple, cheap and quick to do.

But it’s also more likely to rot quickly because each of the direct wood to wood contact points of each 2x2 along the deck perimeter.

The railing design used in this deck project requires a bit more work, but looks better. Building it in this manner will last a little longer because there are less wood to wood contact points among the railing components where water pools or drains.

Begin setting the posts inside of the joists. If you haven’t read the section on attaching the railing posts, go back and read it before proceeding any further.

Build the railing sections from 2x2s with a 1x2 cap running at opposite ends of the 2x2s for the entire length of the railing section. Double screw or nail the 1x2 to the 2x2s to prevent twisting. For this deck we built five sections of 2x2s cut to the exact gap between the posts.

Cut the bottom rails pieces from 2x2 to the exact gap between each of the railing posts. The 45 degree corner section required the 2x4 bottom rail to be cut at about an 11 degree angle. 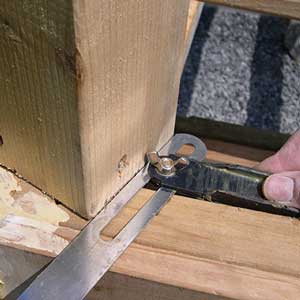 I used a sliding bevel against the inside face of the post and a scrap 2x4 that spanned between the posts to get an exact replication of the angle.

Trace that to your 2x4. Cut one end. Go back to the opening and measure the gap between the inner corners of the opposing posts.

Install all bottom rail pieces between each set of posts leaving at most a 4” gap between the decking and the underside of the bottom rail. Install a small piece of blocking in the middle of the long spans to prevent sagging.

You can also install the same kind of blocking at opposite ends of the each bottom rail. Then screw the bottom rail against each post in a toe-nail fashion.

Then attach the 2x4 directly to the house with screws. I used small spacers between the siding and the 2x4 to ensure a solid contact and ensure no water could get behind the siding.

‹ Previous: Building the Stairs Back to Beginner Deck Building Project ›