I've read a few posts asking about the sandy Florida soil and installing the Titan Deck Foot Anchor™ system. The deck I'm looking to build is 18'x30'. But one section is 18'x18' and the other is 12'x10'. They are offset from each other. My question is two fold. Firstly I only have 10-1/2 inches of height to the bottom of the door. Can or should I use 2x6 spaced a foot apart or 2x8 spaced 16 inch on center. More importantly I was going to use the Deck Foot Anchor for all the outer footings. For the inner part of the deck I was going to use 18x8x4 cement blocks in between the five footings I need for each run. Six runs total. Thoughts would be welcome.

Your description is a bit challenging to fully understand without a layout plan. However, based on what you have described there are some general suggestions we can make if you plan on using the Deck Foot Anchor™.

In most cases, the 24" auger is more than enough to secure the deck foot in place if you are building on undisturbed clay or sandy silty clay soils. However, many people in Florida build decks on sandy soil and wish to have a little extra uplift resistance in case of high winds. Another benefit of using this footing system is that the footings are not likely to be ripped out of the soil and blown through the air in a hurricane like a common concrete deck block might be vulnerable to.

If you are at all concerned about wind uplift resistance and you have sandy soil or a significant slope to contend with, you might want to consider getting the 36" auger. But remember that the longer the auger, the greater the chance you will eventually hit an obstacle like a rock or a root system and this could stop you in your tracks.

Since you are working with a very tight elevation difference, you will most likely have to build your deck using the hanging joist technique with the Deck Foot Anchor™. 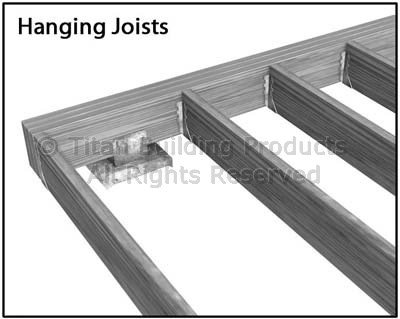 If you set a beam of two 2x6's screwed together and they sit on the deck foot post brackets which sit 2" above the grade you should have enough savings in space to fit the finished deck structure underneath the doorsill with room to spare. The joists are 5-1/2" wide and the decking is 5/4" thick so the total elevation above grade should end up somewhere around 8-3/4" leaving you with about 1-3/4" clearance under your doorsill.

In areas where there is no frost to contend with, you could connect your deck to the ledger and use the Deck Foot Anchor™ to support the beams further away from the house. However, if you are building a free standing deck with this product, and you must build this way if you are in frost zones, then there is a great framing technique you can use to extend the outer perimeter joists by running them beyond the ends of the beam and then filling in between the rim joist and the beam with blocking joists. This extends the deck frame beyond the beam and hides the footing plate. 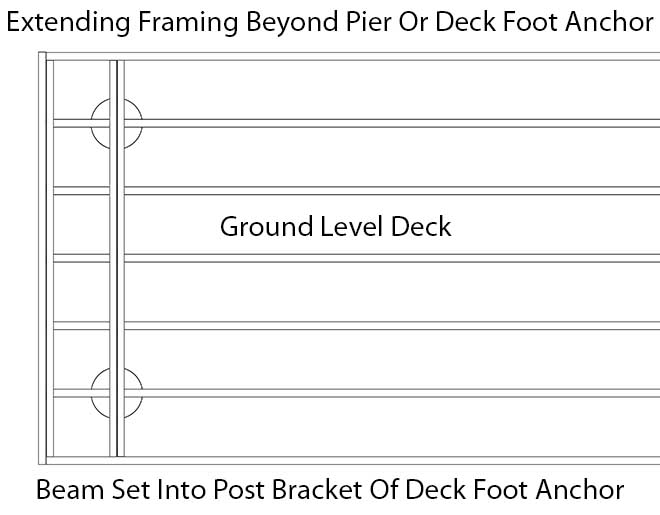 The one issue you should consider is that if you are having this deck inspected by a local building inspector, the IRC does call for 2x8 joists to be used for residential decks. But at 2x8 will be too tall and you may not be able to fit your finished deck structure under the doorsill. Just keep this in mind as part of your planning and consideration.

When you use smaller joists for a deck such as 2x6s as opposed to the more common 2x8 dimension, you have to consider the reduced distance that a narrower joist can span. So a 2x8 at 16" o.c. can span a greater distance than a 2x6 joist at 16" o.c. So for starters, you must or ought to set 2x6 joists at 12" o.c. as you inferred.

We have a series of helpful calculators for such things as beam and joist spans which are inter-related. You can play around with the joist calculator and get a sense of how spans change when joist size and spacing change.

The one part of your question that is a bit confusing is your reference to using both the deck foot anchor and cement blocks. It is not impossible to use both for the same project but you must ensure that no part of your deck is insufficiently supported so that one part of your deck might over load a given area of the soil. Typically one type of footing system is used for a deck.


If you have more questions about different things we discussed in this article, feel free to check out the resources listed below.

If you have questions of your own that you think we could answer for you, submit your question to us, we would love to write more posts about the topics you want answers to!