The first thing that had to be done was build a balcony structure against the outside wall of the old Veterans Hospital building. This was no small feat. 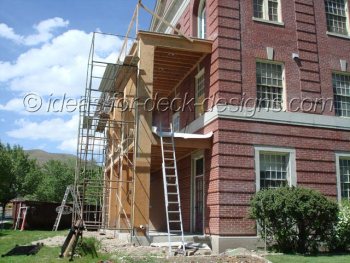 Large concrete footings were built to support the structure and would be engineered to meet the soil conditions and imposed loads.

Remember, because this deck is attached to the ledger, the footings must go below the frost line.

Also, there have been a number of developments in the details of ledger attached decks which you would be well advised to read up on.

The large supporting columns match the size and weight of the brick building.  Anything less would look totally out of place.

For a waterproof deck, of any sort, to actually function properly, no matter how well the waterproof surface is installed, there has to be at least a 2% slope.

Water must move off the deck surface naturally.

Wire and Service Under Deck Ahead of Soffit 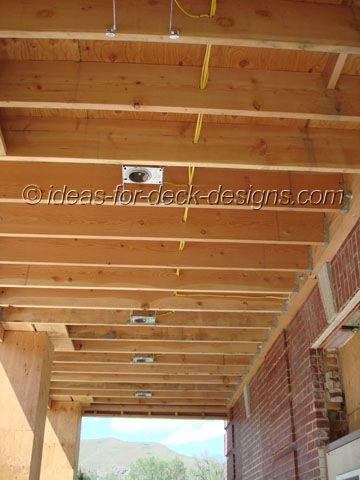 This deck has lighting built into the deck joists.

Time to install the lighting boxes and the electrical runs.

Notice the back blocking around the tops of the framed in columns. Don't forget this - depending on the type of ceiling your are building.

In addition, there is blocking between the the 2x10 joists to prevent twisting.

The most critical safety aspect of this deck is the ledger connection to the building.

Never take short cuts regarding this or you will be risking lives.

If you have any doubts about building proper connections, contact a structural engineer.

If you have a helpful tip you would like to share just contact us. If we publish it we will be sure to credit you and link back to your site.