by Roger
(Caledonia, ON)

What would should one do when building a deck on or over disturbed soil such as back fill? Would it be wise to use a surface resting deck block or a ledger connected deck which would then require digging frost footings four to five feet deep (in my area).

This is an often over looked consideration when building a backyard deck. If the home is less than two or three years old how should you support your deck? Should you used surface resting concrete deck blocks or a traditional ledger style deck with common concrete deck footings?

A Refresher On Ledger Board Techniques

If you are not familiar with connecting a deck to a ledger board here is a great article that explains five common techniques with detailed illustrations.

Once you have read that then quickly check out this article about common concrete deck blocks and you will understand the two concepts were are going to consider.

The Heart of The Problem

The reason Roger is asking this question is because he is correctly assessing the likelihood of the back filled soil (disturbed) settling further over the coming years if this is a relatively new home. Either a ledger connected deck or a deck block design could work but there are disadvantages to consider. Let's get into this...

You should expect the soil to settle and possibly as much as two inches over a few years. So if you have supported your deck on deck blocks then be ready to jack up your deck in the future and either place shims or spacers under the support posts or replace the posts with longer posts.

Here is what could happen if you build on disturbed back filled soil and do not account for some sinking. The movement is exaggerated to show the effect.

Once this is done, you will likely never have to do this again. It is just a rite of passage as the soil settles. No big deal. And with a deck block system you avoid the very detailed work of cutting into the envelope of your house to do a ledger connection.

Here is a must read lesson on ledger connecting on a house after construction.

Or you might wish to do the bigger job of digging right down to the disturbed soil which is probably at the level of your foundation wall footings. This might also entail carefully excavating around weeping tiles or drainage systems so this is not for the average homeowner. This illustration below shows how this technique would be done for a floating or free standing deck. 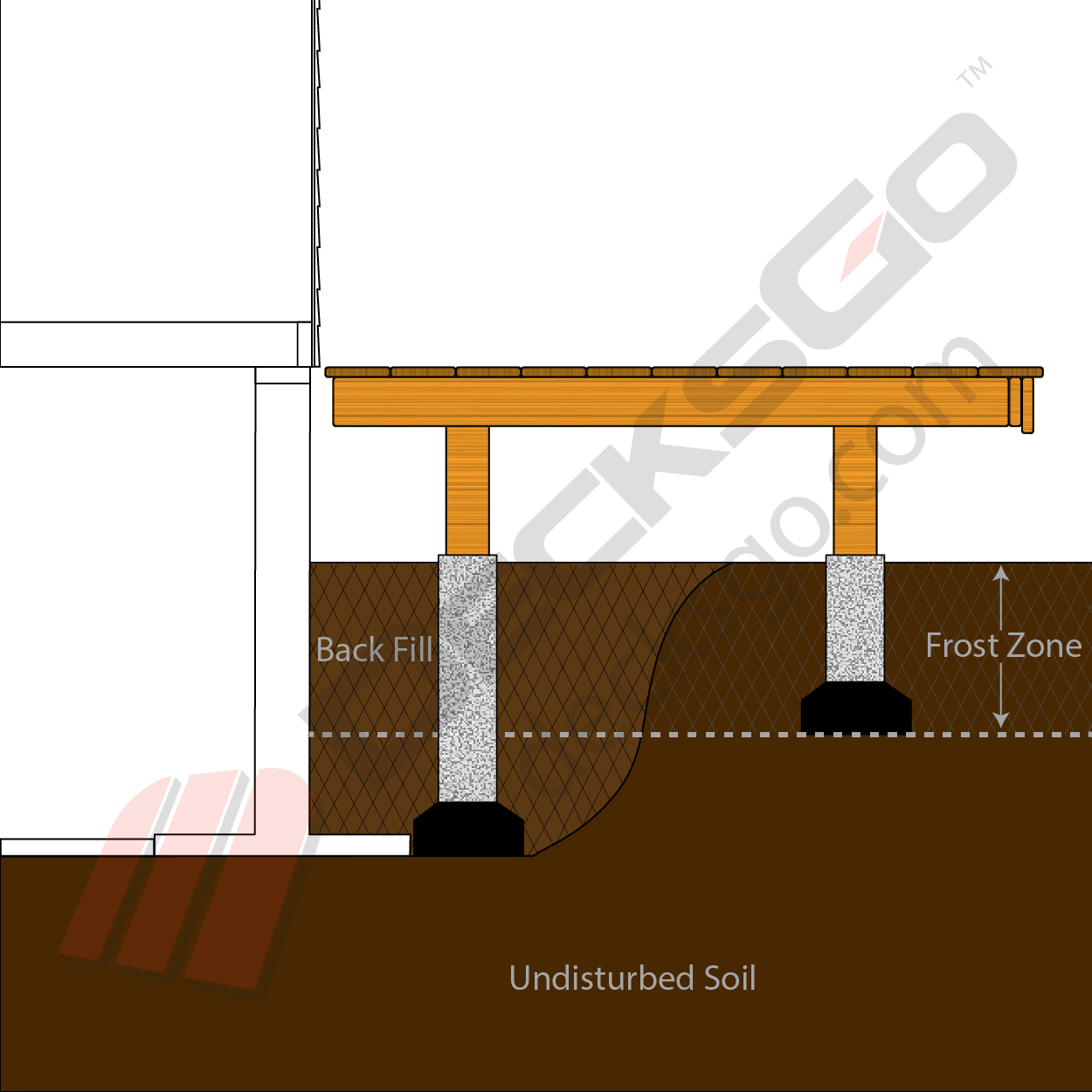 Of course a ledger connected deck avoids all the issues of the soil in the back fill zone settling. But the flip side of this is a lot of hard work. Digging deep holes depending on your frost level and building broad footings to spread the weight.

But perhaps the most challenging aspect is to properly flash and secure the ledger board to the rim joist. If you have a finished basement ceiling it will mean removing the ceiling, any insulation and identifying the location and direction of the joists relative to the deck.

You will also have to double flash the sheathing of the house and seal it properly. Expect a thousand dollars of labor or more to pull this off properly. But if you have a second story walk out deck, this is the only way to go.

So you will have to consider all the pros and cons of both these options.