Attaching a Ledger Board to Your House

The ledger board attachment for this home was challenging because it was done after the house was constructed.  So you will learn how the siding was removed and two layers of metal waterproof flashing were installed around the board.  Complicating matters was the engineered I-joists that had to be reinforced.

For one, it makes for a smooth natural transition to have the deck at the same height or preferably a few inches lower than the kitchen floor.

But it’s also less labor intensive and uses fewer materials than digging holes and setting another set of posts and beams to create a stand alone deck.

There are various ways to attach the ledger but our example is quite common for vinyl clapboard style siding and is waterproof for peace of mind!

Determine the outside dimensions of the framing for the deck and add ½” to 1” to that length. This will give you a ¼” to ½” of extra room to maneuver the ledger if needed.

Determine the location of the floor joists so that you will know exactly where to cut and remove the siding. You can figure this out by looking under the last row of siding.

You should be able to see the concrete foundation and 2x6 sill plate. If you allow 1.5” for the sill plate you can then add the width of the floor joist to figure out where the top of the floor deck begins.

A 2x10 joist is usually about 9 ¼”. If you are not sure, go into your basement and measure the joist.

Once you are sure about the joist location mark out the outer shape of the cutaway area using a soft pencil or marker and a straight edge.

Use a sharp razor knife and a straight edge as a guide to score (cut) the vinyl and after several passes gradually cut through. You want to avoid cutting up the house wrap beneath if possible.

Set the Height of the Ledger Board

Mark on the exposed house wrap the top edge of the ledger. Add on the thickness of the deck board material and mark the top of the finished deck surface as well.

Are you happy with the transition from the house to the deck? A good transition is about 3 to 4” lower than the floor inside the house.

This should still allow for plenty of room to attach the board to the rim joist of the floor.

But keep this in mind as you play with various elevations and don’t forget that you need to position the ledger board and cut the siding at a point that will allow the top flashing to fit under the siding at least 3 to 4”.

Once you have set the height of the finished floor and worked backwards to determine where the bottom edge of the ledger board will be, mark that location on the foundation wall.

Block Joists from Inside the House

This is a very important step to properly attaching a ledger board, especially in homes built with engineered trusses.

The problem with engineered trusses used as rim joists is that they do not provide a solid surface to bolt the ledger into like dimensional lumber. So you must install extra blocking yourself between each joist.

Go down into the basement and get the exact measurement between joists, cut some 2x8 and fit it into place between the joists so that they rest on top of the sill plate.

Screw the 2x8s into the top and bottom edges of the rim joist. This is crucial because all the force of the deck will transfer to these points.

Recently, there has been a move to using non-conductive peel and stick membranes like "Blue Skin" and others.  This is not yet mandated everywhere and we are watching to see if and when this becomes mandated or remains merely a prescriptive measure. You can see how windows and doors are sealed and a similar process would apply in areas where an ACQ treated ledger board is attached to the house. 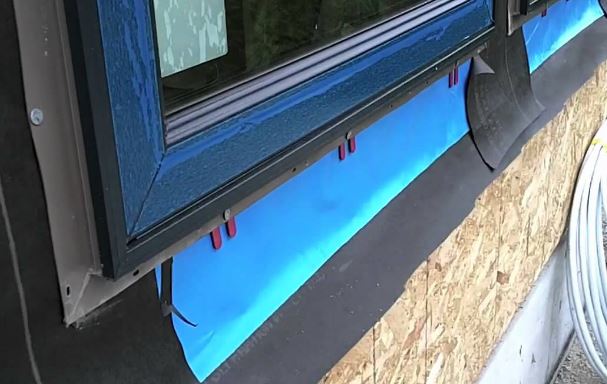 So keep this in mind as it may apply in your area.  The concern is that the ACQ chemicals in treated lumber may in some cases be strong enough to start corroding even zinc coated flashing.

Position the first piece of flashing by tacking it in place. But also transfer the markings on the house wrap for the bottom of the ledger board, rim joist height and top of deck boards to the flashing. Use masking tape.

A story board is a strip of wood placed against a wall with predefined measurements and commonly used when installing siding to keep the boards parallel.

In this case you are not really creating a story board as much as you are “telling the story” – the story of where the sill plate, joist and floor deck are located.

Remember the story lines that you marked on the first piece of flashing? Now they come in handy because you should have marked the top of the finished deck and top of the ledger lines.

You will have to transfer these markings to the ledger once it is tacked into its intended position.

The second piece of flashing will have to be custom cut to fit up underneath the siding. Remember that you should try to get at least 4” up under the siding because this is your first line of defense from the rain and blowing snow.

You may not be able to pry back the siding far enough to nail it against the house. If that is the case, use construction adhesive and run a thick bead as far up and under the siding as possible.

Make sure the flashing is a bit longer than the ledger so that you can bend the exposed flashing over the ends to direct rain water away. The bottom edge of the flashing should be at least 3” so that is fully covers the ledger board and goes past about 1”.

As you can see, the best time to install a ledger for a deck is during the construction and framing of the house before the siding crew arrives. But that is not always possible.

Install the joist hangers onto the face of the ledger board. You must have a framing plan for the deck structure in order to know where each joist hanger is to be located.

Proper planning involves laying out the framing of your deck prior to getting to this stage of the deck building process.